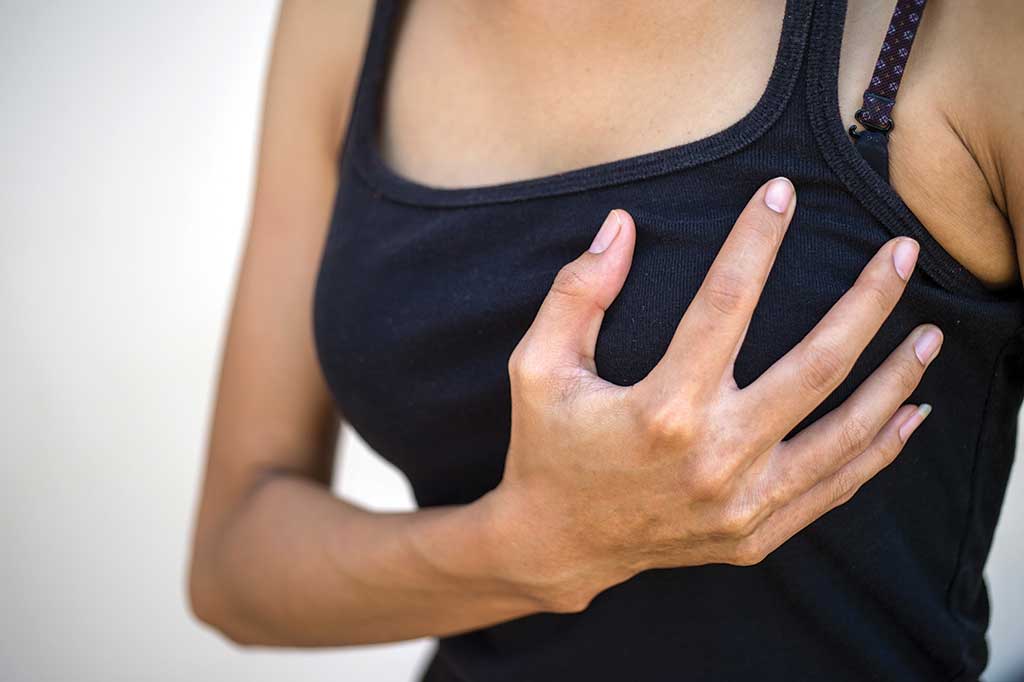 The breast is composed of several glands and ducts that lead to the nipple and the surrounding darkened area called the areola. The milk-carrying ducts extend from the nipple into the underlying breast tissue like the spokes of a wheel. Under the areola are lactiferous ducts. These fill with milk during lactation after a woman has a baby. When a girl reaches puberty, changing levels of hormones cause the ducts to grow and cause fat deposits in the breast tissue to increase. The glands that produce milk (mammary glands) that are connected to the surface of the breast by the lactiferous ducts may extend to the armpit area (axilla).

There are no muscles in the breasts, but muscles lie under each breast and cover the ribs. These normal structures inside the breasts can sometimes make them feel lumpy. Such lumpiness may be especially noticeable in women who are thin or who have small breasts.

•  Lumps within breast tissue are usually found unexpectedly or during a routine monthly breast self-exam. Most lumps are not cancer but represent changes within the breast tissue. As your breasts develop, changes occur. These changes are influenced by normal hormonal variations.

•  Cyclic mastalgia: About two-thirds of women with breast pain have a problem called cyclic mastalgia. This pain typically is worse before your menstrual cycle and usually is relieved at the time your period begins. The pain may also happen in varying degrees throughout the cycle. Because of its relationship to the menstrual cycle, it is believed to be caused by hormonal changes. This type of breast pain usually happens in younger women, although the condition has been reported in postmenopausal women who take hormone replacement therapy.

•  Breast pain or tenderness may also occur in a teenage boy. The condition, called gynecomastia, is enlargement of the male breast which may occur as a normal part of development, often during puberty.But it is usually due to hormonal imbalance, where at a particular time or due to ceratin conditions, estrogen hormone is high. In teenagers, it disappears as they get older. Other causes of gynaecomastia include; obesity, alcohol consumption, Cannabis, Klinfelter Syndrome to mention a few.

•  Breast infection: The breast is made up of hundreds of tiny milk-producing sacs called alveoli. They are arranged in grapelike clusters throughout the breast. Once breastfeeding begins, milk is produced in the alveoli and secreted into tube-shaped milk ducts that empty through the nipple. Mastitis is an infection of the tissue of the breast that occurs most frequently during the time of breastfeeding. This infection causes pain, swelling, redness, and increased temperature of the breast. It can occur when bacteria, often from the baby's mouth, enter a milk duct. This causes an infection and painful inflammation of the breast.

What Causes Breats Lumps and Pain?

Many possible causes exist for pain or tenderness in one of your breasts or in both breasts. Most often the pain can be attributed to harmless causes such as puberty or pregnancy. It can also be a recurrent problem for women with cyclical pain associated with the menstrual cycle. Although cancer is a major concern for most women, it is rarely the cause of isolated breast pain.

Some causes of breast pain are:

•  Onset of puberty or menopause

•  Injury to the breast (trauma, after breast surgery)

•  Shingles (pain is only in one breast, usually accompanied by a rash)

•  An infection in the breast (breast abscess, mastitis)

If you have a lump in your breast, your doctor will check for the following:

• Fibrocystic changes: Fibrocystic changes, previously called Fibrocystic Disease, are the most common benign or harmless (does not threaten health or life) condition of the breast. Changes can occur in one or both breasts, most commonly in the upper and outer sections. You may feel a thickening of the fibrous tissue that supports your breasts. Common lumps, called fibroadenomas, occur during the reproductive years. They feel rubbery and moveable. They often occur with fibrocystic changes.

•  Cysts: Breast cysts are fluid-filled lumps. They can be tender, especially before your period.

•  Genetics is believed to play a role if your mother or sister (referred to as first-degree relatives) were diagnosed with breast cancer before menopause. You have a two to three times higher risk than the general population of developing breast cancer.

•  Hormonal factors may play a role. If you have had the following conditions, you may have an increased incidence of breast cancer (possibly because of longer exposure to a hormone called estrogen).

•  Cancer may also be explained by one of many theories including exposure to viruses, chemicals, radiation, dietary factors, and genes (for example, BRCA-1). No single theory explains all types of breast cancer.

Enforcement of Ethics and Standards amongst Practitione...
Advancing Healthcare in Nigeria requires a Redesign of ...
Managing Fertility and Pregnancy during and after Breas...
PCOS: Reasons, Prevention, and Trends in Polycystic Ova...